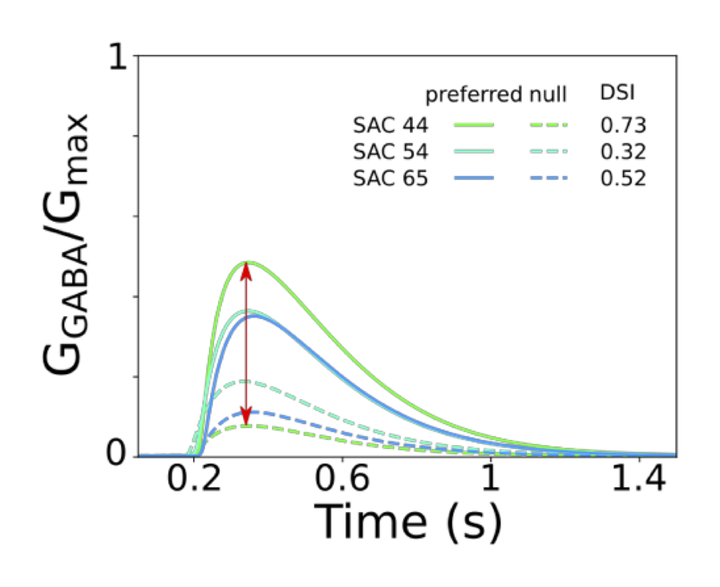 Detection of motion direction in the visual system of rodents is observed at processing stages as early as the retinal circuitry. Starburst amacrine cells (SAC), which are components of this circuit, appear to give rise to direction selectivity (DS), and for stimuli moving in a preferred direction, i.e., away from the soma, SAC dendrites release more GABA than for stimuli moving in the opposite direction. Several neural mechanisms have been shown to contribute to DS in SACs. However, the actual contribution of each mechanism to the phenomenon is yet to be determined. To quantify the contribution of intrinsic and network properties to DS, we implemented a simple, but biophysically plausible, model of 100 SACs including excitatory inputs from bipolar cells and inhibitory SAC-SAC interconnections. We validated the model reproducing published experimental data of dendritic Ca +2 and somatic currents during stimulation with bars, annuli, and gratings. We quantified DS using a DS index (DSI) for a range of stimulus widths, velocities, and intensities. DS was strong, i.e., DSI greater than 0.2, for velocities between 1 and 20 mm/s and medium range intensities, and increasing the distance between excitatory inputs shifted DS to stronger stimulus intensities. Restricting the bipolar inputs to the proximal 2/3 segments of the SAC dendrites dramatically expanded the number of stimulus parameters resulting in DS response, with an increase in the DSI. Finally, suppressing SAC-SAC inhibitory interactions greatly reduced the DSI for all stimulus parameters, except for a small range of weak and slow stimuli. Our results suggest that segregation of excitatory inputs to proximal dendrite segments is a major contributor to DS due to diminished response in the non-preferred dendrite. As well, lateral (SAC to SAC) inhibition appears to be necessary for displaying DS in a wider range of stimulus parameters. Our simplified model geometry sufficed to reproduce the genesis of DS response, and will allow to quantify the contribution of other possible mechanisms to DS.